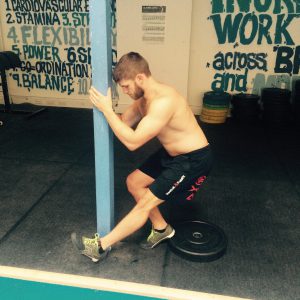 Anterior Knee pain for the CrossFitter

Many athletes throughout their lives may come across pain at the front of their knee. Anterior knee pain is one of the most common symptoms when patients complain of a painful knee. One area we are going to discuss is patellofemoral maltracking which is a common issue causing anterior knee pain. This can be seen in a lot of athletes, especially CrossFitters, who are squatting with quad tightness, weakness and maybe lack of glute strength… could this be you?

What is Patellofemoral maltracking?

Patellofemoral maltracking is when the patella struggles to track properly. An example of this is lateral maltracking when you bend your knee  (the patella glides outwards). Maltracking is described as “excessive lateral alignment of the patella within the trochlea grove” (Pal et al 2012). This can cause anterior knee pain as there is believed to be less patellofemoral contact area which then causes increased joint stress leading to the pain we feel in the front of our knee.

How does it happen?

When we bend our knee our patella should move medially (gliding from the outer aspect of knee to the inner). Our patella movement is controlled by our quadriceps like a puppet with strings. You are probably thinking what are you on about? We are going to imagine the strings are the quadriceps and the patella is the puppet. When knee flexion occurs, if one of the lateral structures of the knee such as the VL is stronger/tighter than the inside structures, Vastus Medialis Oblique (VMO) the VL puppet string will pull the patella laterally causing a painful knee. For a pain free glide our VMO puppet string should pull the patella medially when performing knee flexion (Brukner and Khan).

Imbalances of dynamic (VMO and VL) and static stabilisers (patellofemoral ligament and femoral trochlea) can affect the force distribution along many structures, which could lead to the patella maltracking such as the patellofemoral articular surface, patella, quadriceps tendon and surrounding soft tissue (Sameer et al).

Patellar maltracking can occur due to many other reasons such as

Unfortunately it is hard to estimate the prognosis for patella maltracking due to it normally being a chronic condition. It could take a few days to a few weeks/months dependent on other issues which may be affecting the process of recovery such as glute strength etc.

Don’t let this put a downer on you though as I have some good news.

YOU CAN STILL TRAIN!

I say we can train, yes we can, however we have to focus our training on our posterior chain avoiding knee bending/anterior loading. Posterior chain training is a great way to train with knee pain and a preventive measure for the future. It is believed by increasing our posterior chain activation this will take some load off of our knee stabilisers so hopefully preventing knee pain (Cressey 2008).

Massage therapy is a great tool to release the tight structures which may be causing patellofemoral maltracking. Such as release work of the VL, the puppet string which keeps pulling on the patella to move laterally. Releasing this will allow the patella to track medially at ease without being pulled laterally, allowing a pain free knee flexion. However, there is normally a reason as to why the VL is tight. We need to figure this out and focus on correcting the driver of symptoms.

Patella taping can be used to initiate a quicker contraction of VMO and delay the contraction of VL to allow ‘normal’ gliding of the patella (Gilleard et al). A study by Pal et al 2012 shows that VMO had delayed onset only in maltracking patellofemoral pain subjects. Patella taping is used by applying what feels like an abnormal glide to decrease soft tissue stresses to allow pain free rehabilitation and re-correction of patella movement.

Strengthening your hip abductors such as gluteus medius will help equalise the forces through your lower limbs so your knees are not being overloaded. Weakness of our hip abductors has been evident in a lot of studies with people with anterior knee pain ( Sanchis-Atfonso 2011) therefore, we must strengthen them.

Poor control of your hips can mean increased loading of your patellofemoral joint. These muscular imbalances can increase your risk of anterior knee pain such as patellofemoral maltracking. Ferber et al 2015 states that using hip strengthening protocol results in an earlier resolution of pain than just a knee protocol.

Having stability in our hips decreases the risk of unnecessary stress on our knees. Glute training work will decrease our want to go into hip internal rotation and valgus force at the knee (knee falls inwards), decreasing our risks of anterior knee pain (Sanchis-Atfonso 2011).

Previously looking at the importance of hip stability and strength, especially the strength of our hip abductors, will help in movement correction in certain exercises for example, the squat, to ensure we reduce our risk of knee injury.

When we squat you will see with some people, with poor hip abductor strength and overactive hip adductors, they will let their knees fall inwards causing a valgus stress on our knees. Correcting this positioning when we squat, ensuring you don’t let you knees collapse inwards, will decrease our chances of anterior knee pain. Hip abductor strengthening and stability will help with stabilisation of our femur and lead to improved movement patterns (Contreras 2013).

Another example of movement correction in a squat is making sure we hinge at our hips, do you ever hear coaches say “stick your bum out first”? this is what they mean. Hinge at your hips first and then bend at the knees. This will decrease the load which is being transferred through our knees, decreasing the risk of anterior knee pain.

Do I need to have surgery?

Surgery should not even be thought of until all treatment and rehabilitation options have been put into place. Due to increasing knowledge of the patellofemoral joint and anterior knee pain allows us as Sports Therapists to treat patellar maltracking without the use of invasion into the knee structure. Once a conservative plan has been followed and no signs of improvement has been noted then surgery can be used. It is recommended that at least a 6-12month thorough rehabilitation programme should be used before thinking of surgery.

Thank you for reading.