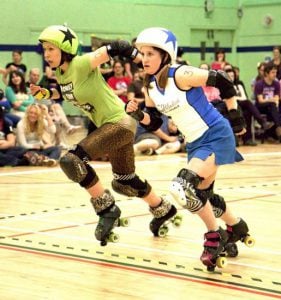 Roller Derby is one of those sports like rugby and hockey where I think you must be slightly insane to want to play. A lot of people struggle with basic ankle balancing exercises let alone adding wheels to your feet and skating. Our aims are to give you some exercises you can do to make those ankles bullet proof and prevent ankle injuries. We obviously can’t help with the nature of your sport such as when you are skating at great speeds and people are slamming into you or someone happens to fall on your ankle. However, we will be able to help with preventing the severity of ankle injuries sustained in your sport.

Sprained and broken ankles are very common in roller derby due to the nature of the sport such as twisting and excessive turning of the ankle joint itself whilst traveling on wheels at great speeds (Parnavels 2013).

We are going to look at typical sprains…

Inversion sprains (normally outside of the ankle pain)

Risks of skating and injury…

1) Take a look at this video below I am not trying to put you off skating I am trying to show you the risks of your sport and the importance of making those ankle strong and maintaining this.

Now do you understand what I mean?

2)Lack of conditioning or weakness in the ankle itself increases risks of ankle injury (Parnavels 2013). 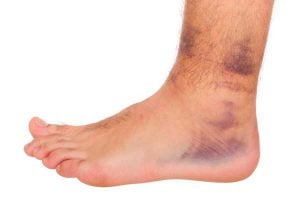 This is dependent on severity of ankle injury. If an ankle injury is severe it is advised that an x-ray is needed to ensure an ankle fracture is not present. An example of an acute ankle sprain management is rest, ice, compression, elevation for the first 72hours then to ensure you then undergo a functional rehabilitation programme.

A study by McKay et al showed that 55% of individuals who suffered an ankle sprain and then didn’t seek further treatment for the ankle had a decreased chance of the ankle ligaments healing properly. Rehabilitation is essential for successful healing of the ankle, ensuring that the newly placed collagen fibres are stressed and forces applied within the ankle, to allow correct alignment of the collagen for a healthy ankle (Hubbard et al). If ligaments are not fully healed they could still be in the elongated state, causing increase in joint movement, which means increased chance of instability of the ankle then increased chance of re-injury.

Ensure skating practice includes injury avoidance techqniues such as falling correctly and also following a strength and conditioning approach to ensure you are strong and fit to take the heavy shoulder and hip knocks throughout a game. Practice sessions should involve elements of scrimmage activity, basic skills, strength, endurance and also SAFETY!

Our ankles need to be prehabbed to ensure we avoid ankle injury at all costs. Yes prehabbed I’m not talking about rehab. Prehab basically prepares your ankle for the intensity of your sport.

These prehab exercises can be done as a warm up before getting your skates on or even just in the comfort of your own home. You are transferring power from your core to your ankles to get power to your skates, if there is a weakness in let’s say your ankles then this can affect your performance and increase risks of injury.

Enjoy ladies and let’s get you those bullet proof ankles!

Thank you for reading

Ankle injuries account for 31-42% of all injuries in netball (Hutson and Jackson, 1982 ) making them a high-risk injury, with ankle lateral sprains being the most popular of all lower limb netball injuries.

You are probably wondering why are they so common?

Mechanism of injury for the famous ankle sprain

In netball, landing accounts for most ankle injuries. Just imagine you jump up to catch a ball then you go to land then instead of landing on your feet and in a good position your right foot twists inwards and causes you to land on the outside portion of your ankle. Yes, I can remember doing this a few times and it kills. This would be known as an inversion sprain, see the picture below.

How and why does this occur?

One reason is that when training/in-gameplay, fatigue can set in and our neuromuscular control, our unconscious activation of our dynamic restraints – which in netball will prepare our ankle when landing – may alter due to fatigue decreasing our ability to keep a stable ankle (Shaw et al., 2008).

This is less common in netball but can still occur. This sprain is the opposite of an inversion sprain and it is where you land on the inside of your foot. This is less common due to the strength of the deltoid ligament on the inside of your foot compared to the lateral (outside) ligaments, which are injured in inversion sprains.

Why is there so many ankle injuries in netball?

Netball is a sport, which involves a lot of jumping and landing with high ground reaction forces on the ankles. Rapid change of direction in netball can cause wrong placement of foot increasing chances of sprain. Many ankle injuries are ignored and being in a sport where a lot of ankle injuries occur, even if it’s just a low-grade sprain, it goes ignored which increases the chances of an ankle injury.

The nature of netball is very explosive with sprinting, jumping, landing, changing of direction and balance as a must otherwise you will end up falling on your face most of the time or injuring your ankle. Preventive measures need to be put in place for netballers to ensure we reduce the risk and keep everyone’s season injury free.

This is dependent on severity of ankle injury. If an ankle injury is severe it is advised that an x-ray is needed to ensure an ankle fracture is not present. An example of an acute ankle sprain management is rest, ice, compression, and elevation for the first 72hours then to ensure you then undergo a functional rehabilitation programme.

A study by McKay et al., 2001 showed that 55% of individuals who suffered an ankle sprain and then didn’t seek further treatment for the ankle had a decreased chance of the ankle ligaments healing properly. A lot of us do this, but it is important as a netballer due to the predominance of ankle injuries in the sport, it is essential that following an ankle injury you follow a functional rehab programme.

Rehabilitation is essential for the successful healing of the ankle, ensuring that the newly placed collagen fibres are stressed and forces applied within the ankle, to allow correct alignment of the collagen for a healthy ankle (Hubbard et al., 2007).

So why are so many people suffering from the instability of the ankle?

This is believed to be due to poor management of ankle injuries. For example, with an ankle sprain if treatment and rehabilitation were not applied to the ankle correctly this could mean netballers could be returning back to sport before ligaments have fully healed. If ligaments are not fully healed they could still be in the elongated state, causing an increase in joint movement, which means an increased chance of instability of the ankle and then an increased chance of re-injury.

There are many ways to prevent ankle injuries from occurring however landing and changing direction seem to be the main areas in netball where these injuries occur.

Ways to prevent ankle injuries would be to increase the strength and stabilisation of your ankle. How would you do this? Easy, just follow some of the tips below which are outlined by England netball.

A good exercise for balance which England netball mentions, is to stand on 1 leg opposite a wall then make 20 chest passes to the wall whilst keeping balance then switching legs.

To wear an ankle support yes or no?

External ankle supports are used a lot through netball. It has been suggested that wearing ankle supports can increase your chances of a knee injury due to decreased ankle range of motion causing more load on the knee. In a study by Greene et al., 2014 this was not the case and highlighted some benefits of ankle supports.

If you are still feeling instability in your ankles/ pain refer yourself to a Sports Therapist so they can give a full assessment of your ankle and put together a sports and participant-specific rehab programme to treat or keep your ankle injury-free.

For any questions, feel free to get in touch by completing the form below.

Physiotherapy is a science-based healthcare profession. It focuses on restoring movement, function and recovery following injuries, illnesses, or disabilities. It can also reduce your risk of injury or illness in the future. In the UK physiotherapists are HCPC registered healthcare professionals, treating individuals of all ages from newborns to the elderly. They use a wide […]

If you want to take your training seriously then s

Massage therapy at IAC Sometimes some TLC and ma

The hip extensors provide the torque necessary to

'Look into my eyes. Do you trust me?' #injuryacti