Nailing our squat position will allow us to utilise the most efficient squat pattern we have available. We should always aim to focus in on our mechanics first. This allows for the greatest amount of efficiency in the lift and therefore less likely to cause us problems going forward. Once mechanics are optimal, we can be consistent with this movement pattern to allow our body to learn and build strength. Intensity built on poor mechanics will likely expose poor and inconsistent movement patterns.

This is never more apparent than when fatigue sets in or we work at a higher percentage of our 1 rep max. The body will always find the path of least resistance. Commonly in a 1 rep max, where the body struggles to lift the weight, compensations such as shooting the hips back and up can result in a good morning type lift.

Whilst the good morning lift may have been trained also, it is unlikely that it would have been performed at this weight and therefore exposes the back etc to a much higher load than previously experienced. This is commonly where injuries occur.

What happens if you struggle to perfect your mechanics?

There are many things to consider when trying to perfect our squat positions. We need to consider the awareness of the movement itself, the available ranges at each joint and the strength of the tissue to create the movement. Joint ranges in particular can often improve through mobility work. Accumulatively, increases in range of motion throughout the body will help us to get into better positions to build strength upon.

Join in with us for our 10 minute squat mobility routine in the video below. We go through 3 different mobility drills aimed at improving your range of motion around your hips and ankles, which will have a direct impact on your squat. If you want to help improve your squat then this is a great starting point.

Alternatively you may be experiencing some pain in the squat and have been told to try and improve your range of motion. PERFECT! This is for you. Just be sure to avoid any pain when you are holding these positions. Concentrate on deep breathing and let yourself passively drop into the movement.

Keep an eye out for our mobility series on our YouTube channel here where we will focus on more than just the shoulders.

What happens to a knee which collapses during a squat

Last week I showed you a video by muscle and motion on lifting injury risks. This week, have a look at their video demonstrating the knee during a values collapse (knee coming inwards) during the squat. It shows which potential anatomy pitfalls that may contribute towards this.

Patella tendon pain can be debilitating.
Pain can develop here due to repeated trauma specifically through eccentric loading (contracting and lengthening). The patella tendon attaches to the tibial tuberosity from the distal pole of the patella. It is commonly overused as the patella tendon is used to transfer forces from the quadriceps muscle group to extend the knee.

Pain is usually worse when loading the knee through flexion. What makes this difficult sometimes is that when we initially load this, it is painful. However if we carry on doing that same movement, the pain often disperses, only for it to come back with vengeance later on.

Firstly, you should always get your injuries checked by a qualified therapist.

However, managing the load through the need and then following a structured rehab programme is often enough to help with this injury. One useful way to help rehabilitate this tendon is via eccentric loading.

In the video below, Coach Tom performs his eccentric drop through his right knee which on a decline and then concentrically pushes himself out of the bottom position using both legs. If there is discomfort here, go through it. Stay below the pain barrier and perform a total of 100 reps throughout the day. This can obviously be built up to gradually increase the loading.

Netball Australia has launched a programme to prevent knee injuries. Knee injuries are the most common injury in netball, making up for nearly two thirds of all netball injuries. Preventative measures are being put into place to decrease the amount of knee injuries and enhance participants playing career, take a look at the article below. http://netball.com.au/netball-launches-program-to-eliminate-knee-injuries/

Got you interested? If you’re a netballer you know what demands your sport has on you such as A LOT of directional change, jumping- to receive the ball, intercept the ball, rebounds from goal shooting opportunities; and of course sudden short bursts of running for a gruelling 60minutes. No wonder you are getting knee pain. As a netballer you need to be able to control the forces generated whilst running, cutting, jumping, change of direction and sudden stopping otherwise certain areas of your musculoskeletal system will get overloaded such as your knees which is the focus on in this blog.

What is anterior knee pain?

Anterior knee pain is pain at the front of your knee. Knee pain can come and go or can get progressively worse if ignored. Pain is a signal that something has gone wrong in our body. It is a way of our body speaking to us so please listen to prevent/ stop an injury from getting worse.

Have ago at our self-assessment…

Any of these your symptoms? I’m not saying this will diagnose you, this is just a way to see whether any of your symptoms fall into these categories. There are many reasons why you may be getting anterior knee pain. We are here to help identify the reasons why you are getting pain and try to help you carry on with netball to your fullest potential. Don’t ignore the pain. If you don’t feel any pain at all and you’re just reading this blog because you’re interested, that’s great as there are lots of things as netballers you can adjust to prevent knee pain in the future.

How to avoid/prevent anterior knee pain

This video shows how the netballer lands with double and single legged work and each time she doesn’t drop her knee in at all when performing netball sports specific stability and landing techniques.

Give it ago and lets keep those knees pain free, stable and ready for netball.

Thank you for reading ladies!

Any questions feel free to get in touch.

A small review on the outcome. 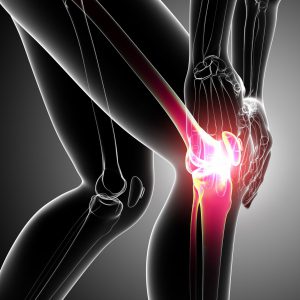 Patellofemoral pain syndrome (PFPS) occurs very frequently in young adult females. It is also the most common injury affecting recreational endurance runners. However, despite being so common, its exact cause remains unclear and diagnosis of PFPS is usually made once other, more easily diagnosed conditions have been ruled out.

Findings from this study suggest that it is important to incorporate both knee and hip muscle strengthening programmes when dealing with knee pain. Especially for short term outcome.