Having tight hamstrings is an issue for a lot of people. This research below shows that using a foam roller to self release does not improve the length of the tissue. Perhaps more research should be performed on eccentric loading to increase muscular length.

POPULATION: 19 male subjects, aged 22 ± 3 years. The subjects were assessed for leg dominance and each leg was allocated into either the SMR+SS or SS conditions.

INTERVENTION:All subjects performed 4 static stretches lasting 45 seconds, 2 times per day for 4 weeks on both legs. In the SMR+SS condition, the subjects also performed 4 bouts of foam rolling, lasting 60 seconds each, prior to each stretching session.

The researchers found that peak passive torque (as measured by the dynamometer at the point of peak knee extension angle) increased significantly by 5 ± 8Nm in the SS leg and 6 ± 14Nm in the SMR+SS leg. Stiffness was only altered at end ROM. There were no significant differences between the two conditions for either peak passive torque or stiffness.

The researchers found that MVIC torque (as measured by the dynamometer) increased significantly by 5 ± 9Nm in the SS leg and by 2 ± 9Nm in the SMR+SS leg. There were no significant differences between the two conditions for either peak passive torque or stiffness.

Fascia is the soft tissue component of the connective tissue system that both penetrates and surrounds muscles, bones, organs, nerves, blood vessels and other structures and extends from head to toe, from front to back, and from surface to deep in an uninterrupted, three-dimensional web. It is widely- recognized as being part of a body-wide tensional force transmission system. Nevertheless, there has been significant disagreement in respect of exactly what fascia comprises. This lack of agreement has caused a great deal of confusion and different anatomy textbooks and articles referring to fascia continue to do so on the basis of slightly different definitions. Disagreements aside, researchers have differentiated between several layers of fascia: a superficial fascia, a deep fascia and visceral fascia.

The superficial fascia is a fibrous layer with a membranous appearance and abundant elastic fibers and occasional thin sub-layers of fat cells interspersed between layers of collagen fibers. The deep fascia seems to differ in its make-up depending on anatomical location. In the trunk region, it is formed by a single layer of undulating collagen fibers mixed with elastic fibers. Overall, fascia seems to help maintain structural integrity, provides support and protection, acts as a shock absorber, has a role in hemodynamic and biochemical processes, provides the matrix permitting inter-cellular communication, functions as the body’s first line of defense against pathogenic agents and infections, and creates an environment for tissue repair post-injury. The extent to which fascia is involved in these areas and its relative importance remains difficult to quantify, as the field is rapidly evolving. However, based on these findings, it should not be surprising if studies report effects via fascia on areas as diverse as muscular force transmission and arterial function. Myofascial release is a form of manual therapy that is increasingly becoming used by physiotherapists and manual therapists for treatment of many conditions, including musculoskeletal pain.

Myofascial release involves the use of hands, knuckles, elbows or other tools to exert pressure on the muscles and fascia of the body. It is thought that by exerting pressure on the muscles and fascia, areas of hardened muscle and/or fascia can be encouraged to relax. A number of different mechanisms have been proposed to explain how this process might occur but there is currently no strong consensus in favor of any single mechanism. Self-myofascial release (SMR) is simply that category of myofascial release techniques that are performed by the individual themselves rather than by a clinician. Consequently, SMR techniques most often involve a tool with which the individual puts pressure upon the affected area. The most commonly-used SMR tool is the foam roller.

INTERVENTION: All subjects performed 2 bouts of foam rolling on the anterior thigh, each lasting for 1 minute, after a standardized dynamic warm-up. The warm-up comprised 5 minutes on an indoor cycle, 2 sets of 20 bodyweight squats, 2 sets of 10 leg swings in both frontal and sagittal planes, and 2 sets of 10 bodyweight lunges.

The researchers found that there was no significant change in relative rectus femoris length (−0.005%).

The researchers concluded that a 2-minute bout of foam rolling of the hip flexors produced a small change in peak hip extension angle, as measured during the modified Thomas test, but there was no change in either peak knee flexion angle or estimated rectus femoris length.

The study was limited in that there was an extensive dynamic warm-up performed and it is unclear whether similar results would have been observed without this warm-up. 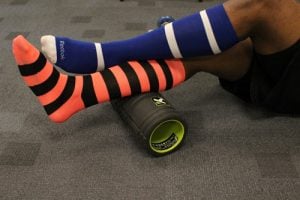 Why do we foam roll & how does foam rolling work?

Most of you will have had a go on this torturous piece of equipment, encouraged by your coaches to work on those tight areas and help improve range. However, do we know why? Does foam rolling actually help increase range of motion? How does foam rolling work? As a sports therapist, I often give my clients some foam rolling homework to do to help simmer down their fiery trigger points. But how does this work? As a relatively new method, there is a lack of science behind the theory.
END_OF_DOCUMENT_TOKEN_TO_BE_REPLACED

A big part of the Injury Active way of treatment i

One exercise can target numerous injuries, just as

Calves blowing up with running? It's not always