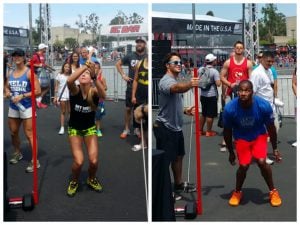 A review of why hip external rotation strength is important for landing. This can be directly linked and carried over into many sports such as crossfit through, box jumps, skipping, snatching, cleaning, burps etc. With a better knee position during landing, we reduce the risk of injury at the knee immensely.

The gluteus maximus originates on the posterior quarter of the iliac crest, the posterior surface of the sacrum and coccyx and the fascia of the lumbar spine. It inserts on the oblique ridge on the lateral surface of the greater trochanter of the femur and the iliotibial band of the fascia latae. In humans, the gluteus maximus is much larger than in other apes, particularly in respect of the upper region. Additionally, it is attached to the iliac crest as well as the ischium, which is not the case in other apes. Also, in other apes, the gluteus maximus is subdivided into two separate muscles whereas in humans it is a single muscle, albeit with multiple subdivisions. Indeed, the gluteus maximus contains 3 divisions from top to bottom (superior, middle, inferior) and two halves from side to side (medial and lateral) that can be shown to perform distinctly different functions in 6 regions, as can be shown by both muscle architecture and electromyography (EMG) activity. The gluteus maximus can also be subdivided into superficial, deep sacral and deep iliac layers. The gluteus maximus is an extremely important muscle and is the largest and heaviest of all the muscles in the body. It comprises around 13 – 15% of total leg muscle mass by weight (around 600g in elderly males). It has a physiological cross-sectional area of ~34cm2 and an anatomical cross-sectional area of ~ 48.4cm2. The muscle architecture of the gluteus maximus is extraordinary in that it has both a long fascicle length and a large cross-sectional area. It is also strongly pennate, as might be expected from its large cross-sectional area. The gluteus maximus is 52 – 68% percent type I fibers, making it an evenly mixed slow and fast twitch muscle. It has its most significant moment arm in the sagittal plane for hip extension but also has a large moment arm in the transverse plane for external rotation. It also has a very small adduction moment arm in the frontal plane. Our current understanding based on anatomy, muscle architecture and EMG studies indicates that the gluteus maximus performs a number of different hip actions from extension, to external rotation and abduction/adduction. It also raises the trunk when the femur is fixed in position, and posteriorly tilts the pelvis. The gluteus maximus therefore requires a range of different movements performed with these actions in mind in order to target it fully. Various pathologies have been associated with gluteus maximus weakness. A weak gluteus maximus has been associated with an increased risk of lower back pain, excessive anterior pelvic tilt, sacroiliac joint pain, piriformis syndrome, anterior femoral hip glide, knee valgus and increased ACL injury risk and hip internal rotation and consequent foot pronation.

INTERVENTION: All subjects were tested for hip external rotator and hip abductor strength, using a hand-held dynamometer. In addition, all subjects performed between 3 and 5 trials of 3 different types of unanticipated single-leg landing tasks (1) single-leg land-and-hold, (2) single-leg-land-and–side-cut, and (3) single-leg-land-and-forward-run, while the various measurements were taken by the researchers of joint angle movements and ground reaction forces. The landing was performed from a box normalised to the maximum height that each subject would land from after performing a vertical jump.

The researchers found no differences in respect of the outcome variables between the 3 tests measured and therefore they analysed the data for the tests all together. They found that hip external rotator strength was significantly and positively associated with peak hip external rotation net joint moments (r = 0.47), greater peak knee internal rotation net joint moments (r = 0.41), greater hip range of motion in the frontal plane (r = 0.49), and less knee range of motion in the transverse plane excursion (r = -0.56).

The researchers found no differences in respect of the outcome variables between the 3 tests measured and therefore they analysed the data for the tests all together. They found that hip abduction strength was not associated with any of the measurements taken.

The researchers concluded that athletic females with greater hip external rotator strength are able to control the lower body movement during unanticipated single-leg landing and cutting tasks. However, they found that hip abductor strength was not associated with any beneficial movement pattern.

The study was an acute biomechanical analysis and therefore cannot provide inform whether changing hip external rotator strength is likely to alter movement patterns, nor whether such alterations are likely to lead to altered injury risk.